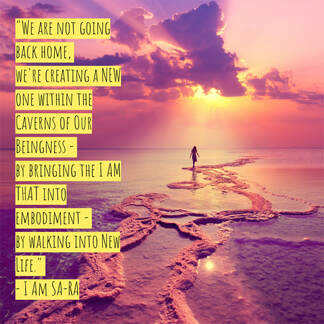 I am an ascended and embodied being who returned to Earth to explore the New Life that is Embodiment.
And, to sovereignly support beings choosing realization while staying in physical form.
My name is sa'RA.
Ascended Master Morya joins us here, as well as other beings adding their inimitable streams of consciousness.
We meet in a space where we come together to create yet never lose sovereignty.
I play in my Is-ness and Morya plays in his Is-ness.
​Together we Create here, for Now.
​ It's all for you, in service to you, and there is nothing more sovereign than that.

Lauren, the human expression of Self, is a writer and adventurer who enjoys playing like a child in a world where life is taken way too seriously.

She fancies herself a humanizing divinity journalist and shares her personal self-realization stories for a niche audience of readers choosing the experience of realization while staying in physical form.

Lauren hails from Austin and the Gulf Coast regions of Texas and lives everywhere. She passes her time on Earth playing with her dog (Professor Ollie), reading, writing, hiking, surfing waves and alternate realities, admiring art, absorbing music, and dancing with those who others do not see. Lauren previously worked as a newspaper reporter, a nonprofit lobbyist, and a business owner before stepping into the realized state of being in the fall of 2017 and embodiment of initial realization in 2019.  "Lauren" is quite a strange thing for me because my life doesn't contain a 'you' only a You, yet for the sake of story...

SAR'H (sa'RA):
​A Consciousness of Being Embodied in New Life 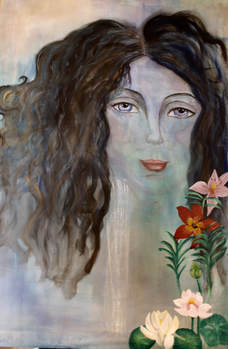 In some ways, and at a basic level of understanding, Sar'h is the name of the oversoul and body of wisdom unique to my human expression of Self - Lauren - in embodied form.

Sar'h, like many of you reading this, held lives in Atlantis and during the time Yeshua walked on Earth, and worked to establish the first religions and governments on Earth, as well as passionately supporting the merging of Eastern and Western concepts of self-realization.

In this perception or layer of reality, she, for lack of a better pronoun, has incarnated as both a man and a woman and had many less than so-called desirable lives. Wanting to experience everything human life had to offer, she has played every role from victim to perpetrator, wounded to warrior, and everything in between.

This version of Sar'h maintains her name from a life in Biblical times, in which she was a child at the time of Yeshua and Mary Magdalene experiences on Earth. In this lifetime, Sar'h experienced self-realization during her short time on Earth. She made the choice to reincarnate as Lauren to experience embodied realization at this magical time and space on Earth, live a life of joy and freedom, and to sovereignly support others choosing self-realization and staying into full embodiment, with reverence and compassion.

In a greater perspective, the name Sar'h (pronounced and sung saaahhh - RAAA) also in the Atlantean vibrational language refers to the New Life that is accessible to those allowing embodied realization in this unique time and space. The GodSelf embodied. Beyond the self-realization experience and simply ending the reincarnation cycle lies a potential for an entirely new way of existence to us all - embodied creation. That is specifically what I share on my subscriber-based offerings.  PATREON series here.

Sar'h - in her ascended master facet - loves visiting fellow souls in the dream state or on long walks in nature – as a dear friend rather than a teacher. She enjoys communicating in images and sensations. Sar'h and Lauren as One is/are passionate about reminding others the kingdom of God is within. Divinity resides inside of all of us and cannot be found looking towards the heavens. The human facet of Self never becomes enlightened or perfect, and instead must be embraced for its perfectly imperfect nature as it integrates and is woven into the golden tapestry of Self. Go wild, dear human, and perhaps join your soul for the wildest dreamed destiny of the soul - embodiment of the I AM consciousness! 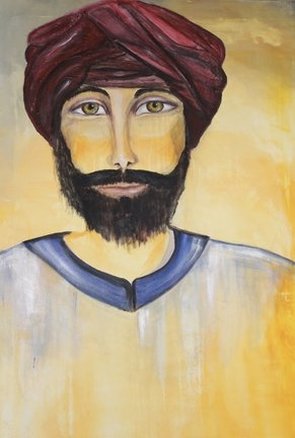 El Morya received his name from his last incarnation on Earth as El Morya Khan, in which he was born a Rajput prince in the early 1800s. In this life, he experienced embodied enlightenment, ascension while staying in the physical body, in the late 1800s. Or as we call it now, self-realization and embodiment.

El Morya has worked endlessly with St. Germain to promote individual freedom, also called sovereignty, a core understanding of everything we share. In his last life, Morya was best known for his work with masters Kuthumi and Djwal Kul, the other magi at the birth of Yeshua, acquainting the West with the reality of the invisible world through the Theosophical movement lead by Madame Helena P. Blavatsky.

Their collective creations laid the groundwork for the New Age and yogic philosophy – pre-dating Yogananda's legacy – movements in the Western world, which swept over the United States during the last century.

Without the grand creations of these masters, few of us would be walking through the New Energy experience, which is beyond supportive for embodied realization and the New Life that is embodied creation. Yet, few if any people know what El Morya experienced in realization and after his time and leadership with the Theosophical movement. When the time is right, we will make those journals public.

El Morya first appeared to my human expression, Lauren, as a turtle in 1988, when I was seven years old. When I was thirty-two years old, he re-introduced himself and asked if I was finally ready for 'it all.' The answer was a resounding YES, and it changed my forever. El Morya and the greater expression of myself, Sar'h, hold a deep, loving friendship, which spans eons of existence, including one life in which I was his mother, another as a wife, and all sorts of things in between.

Today, my human expression, Lauren brings forth the essence and, on occasion, the voice of El Morya in books and articles to support those choosing embodied realization - mastery in ending the karmic reincarnation cycle, while staying in the physical body - and what comes in the New Life iteration of Self.

El Morya maintains embodied realization is not a destination to pack your bag for and arrive at.
It is an existence, a way of BEING, which we all here define as the PERPETUAL STATE OF BECOMING
- an always dynamic and never static state of motion. Ahhhh....

The dictionary definition of channel is joining two bodies of water together, mainly two seas - well in this case, three.
That is exactly how Lauren, as my human expression of experience; Sar'h, as a stream of consciousness, the consciousness of being embodied; and El Morya, the ascended master on the 'other side' share wisdom in story form.

As I write, my human expression of Lauren allows both the streams of consciousness from Sar'h (sa'RA) and Morya to permeate all of my written expressions, connecting all three seas into an ocean of consciousness expressed and experienced on Earth - not from out there, for example, a star or galactic being or group, which has no grounding force or experience on Earth in human form.

That is why my human facet of experience called Lauren is so important to this sharing - it is the grounding force, if you will.
All of us here are having the experience of bringing the human expression with us into self-realized form without leaving the body.
That is the "heaven on Earth" or "New Earth" experience we all have dreamed about since the era of Atlantis, or Ault.

Sometimes, the perspective in my writing is 'I'- a direct story of human experience, and it it sometimes is 'you.'
When I use 'you,' it is Sar'h and Morya streams of consciousness communicating with my human expression - something I discovered others like you can relate to, and why my writing has a small yet highly supportive audience.

It taps into a stream of consciousness that you are in some way connected to
- a relational yet unique experience that will not exactly match yours or anyone else's.

Instead, of saying something is a pure message from a being no longer in form, when I, Lauren, first started channeling, I knew deeply there was no such thing. I also knew I was not just bringing wisdom for others, but more so for me, as a human expression, first and foremost - that is my number one joy - ME!
​
As a result, I do not share any information or wisdom without having fully embodied it first. There's no right or wrong way here, just what works for any given medium. This is our way here now, subject to the changing tides of consciousness.

We are honored to know you!